The Warmia and Masuria Branch of PTTK in Olsztyn is the oldest tourist organization in the Warmian-Masurian province. It has existed since 18 May 1946.

There are several branches of PTTK in Warmia and Masuria, which organize various types of tourist events: orienteering, hiking and cycling rallies, canoeing, cruises, sightseeing tours, as well as recreational and sports activities. When planning a trip around Warmia and Masuria, you can take advantage of the experience of PTTK guides and set off on one of the marked trails in the region, which allow you to discover the beauty of the region, get to know the cultural and natural heritage, as well as to experience the hospitality of the inhabitants. 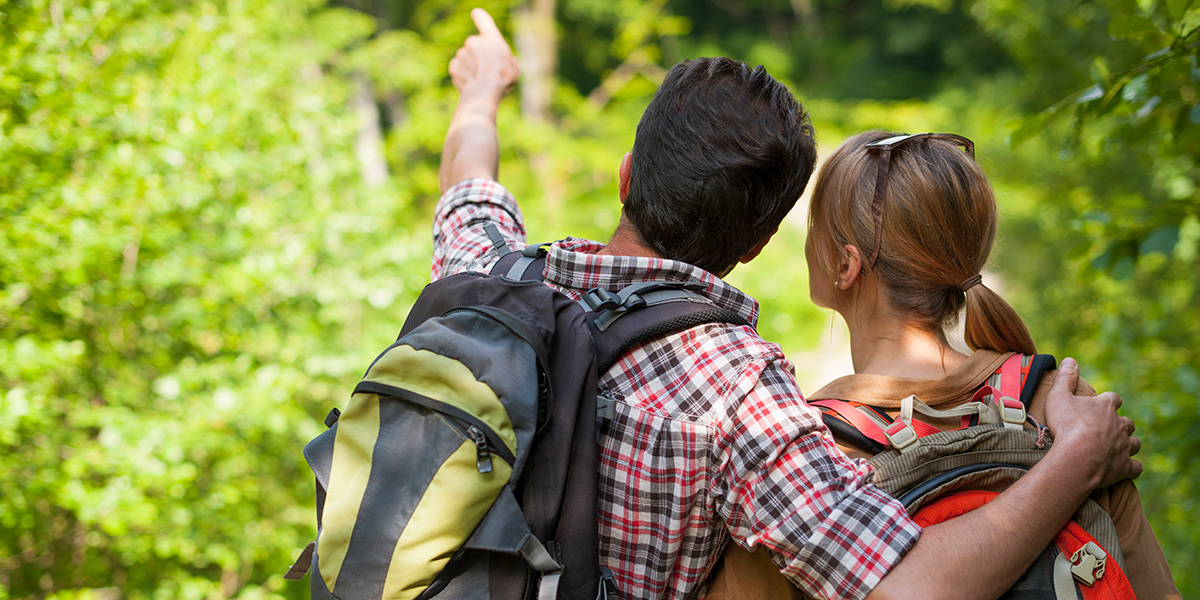 A great adventure awaits in Warmia and Masuria. There are as many as 36 marked hiking trails, leading through the land of lakes, unspoiled nature and inspiring culture.  The routes are varied in terms of difficulty and length – you can easily choose the best one for you. Ready to meet with nature and tradition? 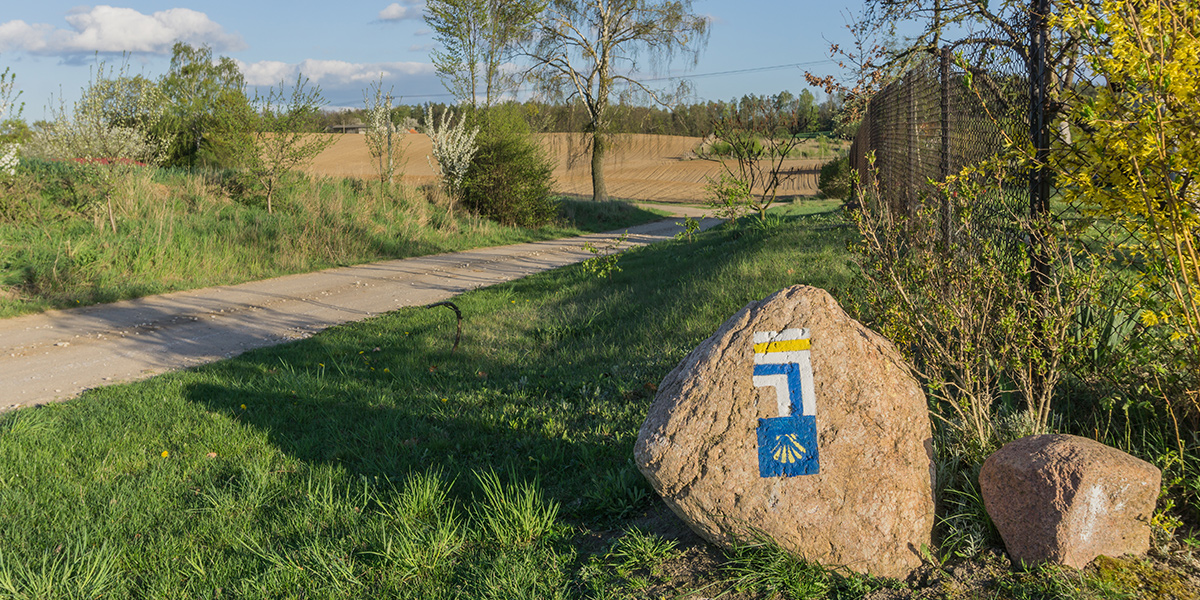 The Way of St. James

The Way of St. James, also known as Camino de Santiago, is one of the most famous pilgrimage routes in Europe. The whole route is over 300 km long and leads through Estonia, Latvia, Lithuania, Poland, Germany, France and ends up off the coast of Spain, in Santiago de Compostela. Since 1993 the Way of St. James has been on the UNESCO World Heritage List and its history began in 812, when the relics of St. James the Apostle were found.

The trail in the voivodeship runs through beautiful regions of Warmia and Western Masuria – the picturesque Drwęca valley, the shores of lakes, charming towns and places of religious cult. The Warmia-Masuria section of the trail has been conventionally divided into sections: Olecko-Kętrzyn-Olsztyn-Lipowiec.

The whole route is marked in three ways in the area of Masuria and Warmia:

Following in the footsteps of St. James, it is worth visiting St. James Cathedral in Olsztyn, the castle of the Warmian Chapter where Copernicus worked and lived, the Marian Sanctuary in Gietrzwałd, the Teutonic castle and the Gothic church of St. Dominic Savio in Ostróda, the church from the 14th century in Frednowy, and in Nowe Miasto Lubawskie it is worth stopping for a while at fragments of the defensive walls and city gates from the 14th century. 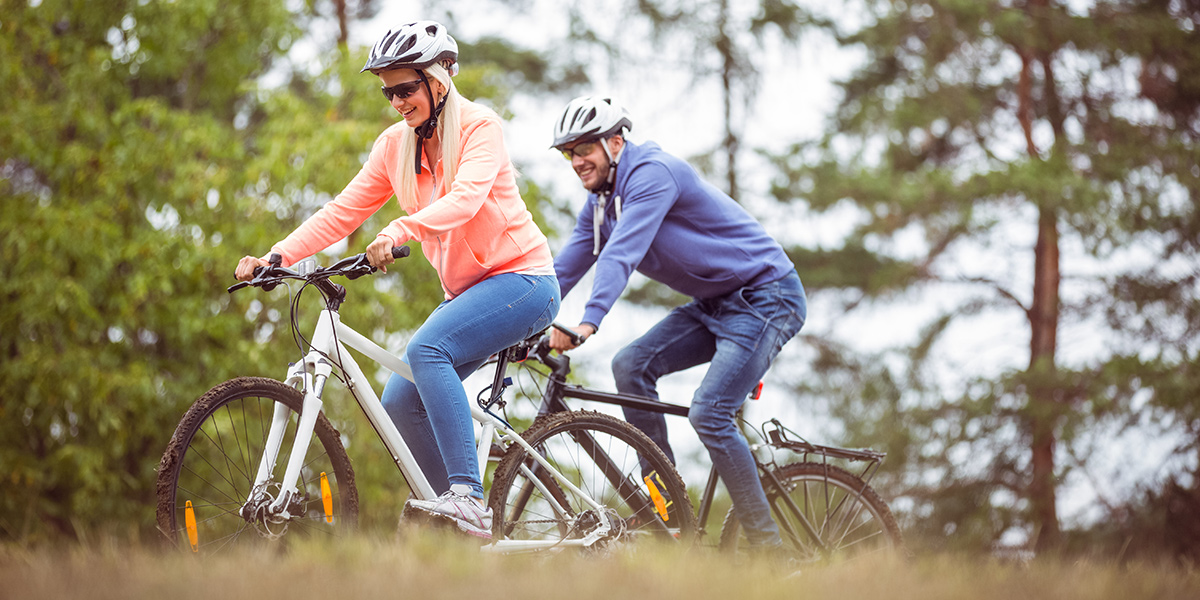 Warmia and Masuria is a dream place to set off on a bicycle journey. The most beautiful cycling trails for beginners who love two wheels and those who are more advanced in bicycle trips offer unforgettable experiences and communion with undoubtedly beautiful nature of the region. The routes along lakes and winding rivers, monuments and attractions for which Warmia and Masuria are famous – 36 marked bicycle trails await you here. The length of the routes, level of difficulty, main attractions and all practical information can be found on the website of the Warmia and Masuria branch of PTTK.

You don’t even have to take a holiday, all you need is a bicycle and a bit of fitness to go on an adventure and commune with the extraordinary nature of the banks of the Krutynia River and admire the silence and richness of flora and fauna of the Pisz Forest. The whole trail is almost 70 km long and you can take a rest from the ride by changing to a canoe and sail down the queen of Masurian rivers.  The route of the trail leads from Sorkwity, through the villages of Jędrychowo, Rodowo, Gant, Spychowo, Zgon, Krutyń and ends in the village of Gałkowo. There are several points on the route where it is worth to get off the bike. In Rodowo there is a thematic village “Rodowo enchanted in wood”, where there is a wealth of wood and wooden artistic products, and in Grabowo there are wooden sculptures of the heroes of Julian Tuwim’s poem “Rzepka”. Krutyń is a village famous not only for canoeing, here is the Natural History Museum of the Masurian Landscape Park. 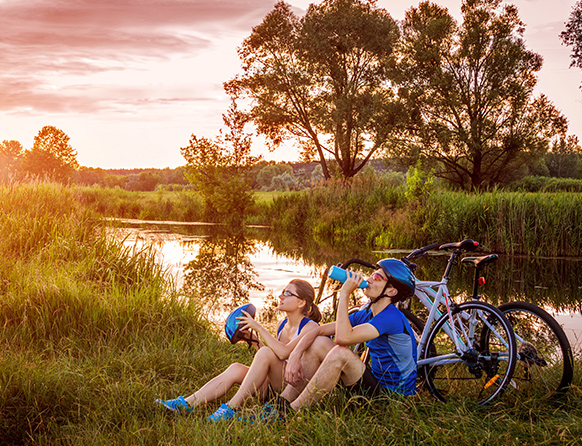 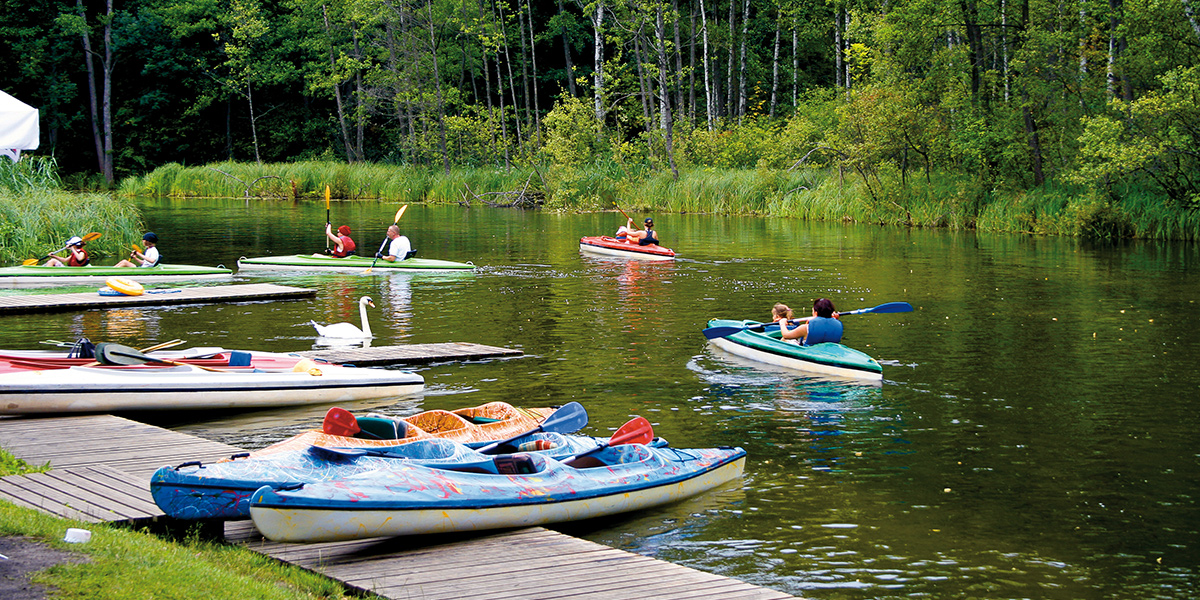 On canoes you have nature literally at your fingertips. Meandering rivers, silent forests and clean air attract kayaking enthusiasts to Warmia and Masuria.  One of the undoubtedly best known and most beautiful canoeing trips in Poland is the Krutynia river rafting, it is also the most popular one. 10 PTTK water stands located along the route gives the opportunity to spend the night, eat and cover the whole route, which is over 100 km long. But in Warmia and Masuria there are 18 PTTK canoeing trails and we assure you that it is worthwhile to get to know also the less frequented routes, such as the canoeing trail of the Pisa or Łyna. 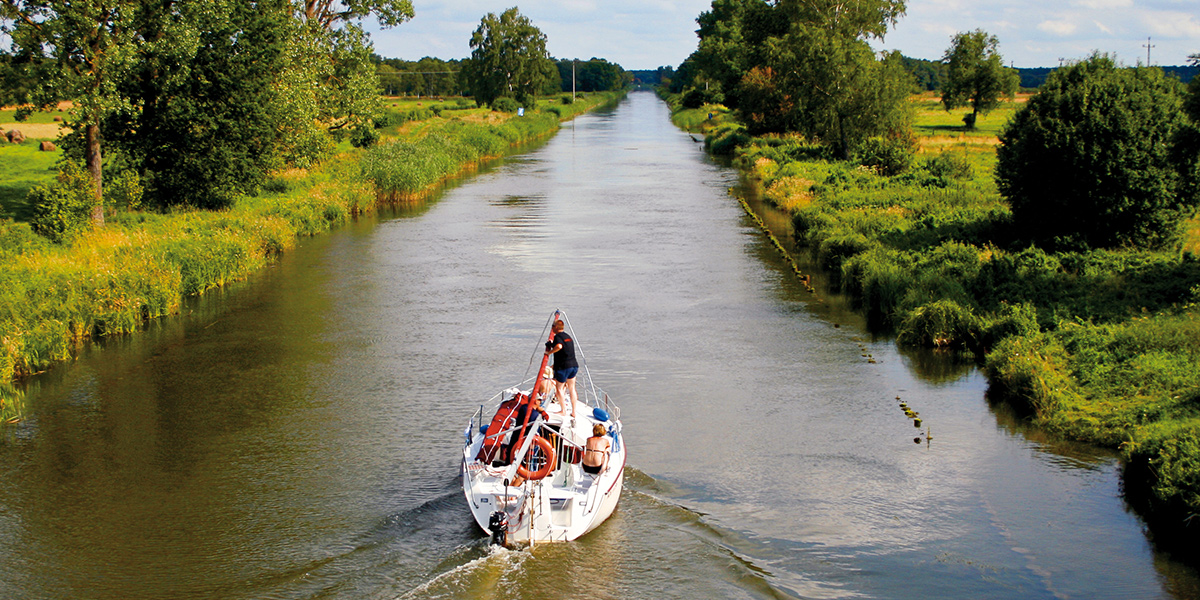 Lakes, sun, sails and joy! There are plenty of places to sail in Warmia and Masuria. Dozens of large waters in the whole region, extensive complexes of two largest lakes in the country: Śniardwy and Mamry, connected by a network of canals with other reservoirs, form the Great Masurian Lakes Route, which is extremely popular among sailors. The longest lake in Poland – Jeziorak – also offers many opportunities, as well as the Vistula Lagoon, connected directly to the Baltic Sea. PTTK offers two exceptionally attractive routes that can be sailed. One of them runs through Lake Mikołajskie and Lake Bełdany and Lakes Guzianka Mała and Guzianka Wielka. The second one allows you to enjoy your holiday on Niegocin and Kisajno lakes. 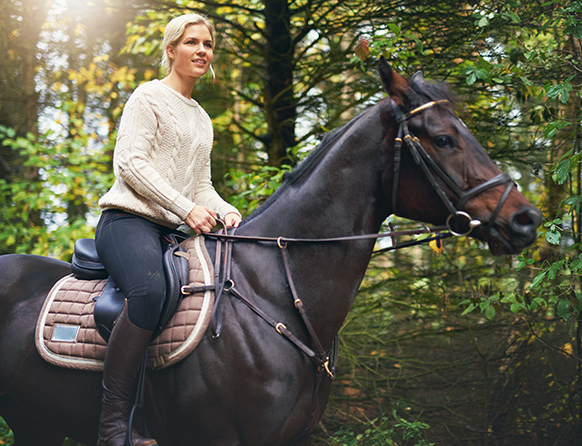 Horseback riding in beautiful natural surroundings finds more and more supporters. In Warmia and Masuria there are many places where you can ride a horse, but specially developed and marked trails are best suited for this. Watching forests, fields and meadows from the perspective of a horse’s back is an unforgettable experience. The network of equestrian trails in the region is still developing, and many stud farms mark out their own local trails, each with its own specific charm. PTTK has marked two horse trails: nearly 10 km of the Bałda horse trail and the longer, 20 km long Zimna Woda. 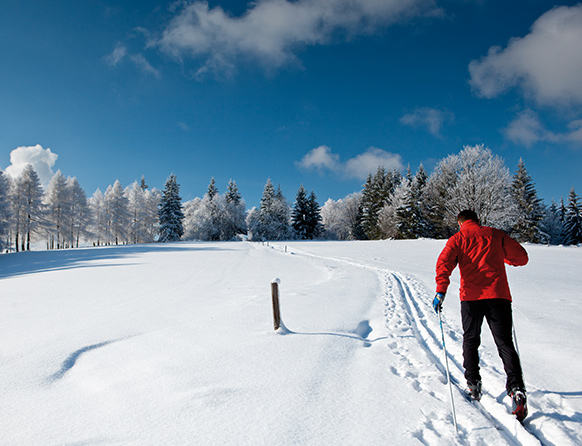 Not only in the mountains you can ski. In Warmia and Masuria, skiers will also find opportunities to indulge in their passion. Forest ducts and picturesque roads leading through fields and meadows, which in a white winter coat look particularly elegant, encourage to cross-country skiing. Specially marked trails are particularly close to downhill skiing resorts. Two PTTK marked trails are available: “By the Czos Lake” in Mrągowo and the Ski Trail in Mrągowo by Czarne Lake. 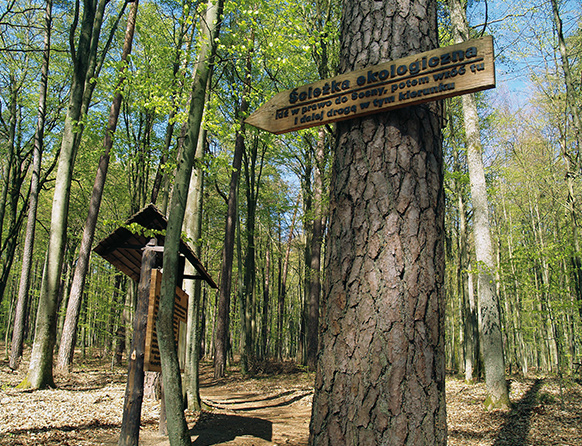 In many regions of Warmia and Masuria, particularly interesting and valuable natural values of the environment have been preserved. Numerous educational and ecological paths will undoubtedly help to get to know them, and PTTK has marked out 13. They are designed to bring closer the secrets of fauna, flora and inanimate nature by means of information boards and exhibits set up along the route. The paths are marked out in such a way that they run next to the natural treasures characteristic for the place. Following these trails is a wonderful way to spend time as a family.